I’ve been blogging, writing and working online since 2012.  Here is a small sampling of some of the media attention I’ve gotten.

“Search the web, and you’ll turn up a disappointing amount of information on the ridesharing sites, and only about a half-dozen companies that offer support services like health insurance, as well as a few blogs like the one Campbell keeps. Yet the industry giant, Uber, boasted hundreds of thousands of what it so delicately calls “driver partners” on New Year’s Eve. I can’t help but wonder: Shouldn’t there be more people like The Rideshare Guy?”

“Drivers for Uber and Lyft, for example, rate their passengers from one to five stars at the end of each ride. If a rider receives three stars or fewer, the driver and passenger will not be paired up again…  These are among the ways that sophisticated rating systems can turn on the customer, identifying the best and worst among them.  Harry Campbell, an Uber driver in Orange County, Calif., says he reserves his lowest rating only for the most egregious cases.”

“Harry Campbell is probably the Kingpin of the Uber advice market. On his website, TheRideshareGuy.com, Campbell offers up podcasts, blog posts and links to resources like mechanics and car accessories. Since launching a year ago, his site has grown to attract 100,000 unique visitors a month. Four months ago, Campbell, realized that the site was lucrative enough to quit his full-time job as an engineer.” 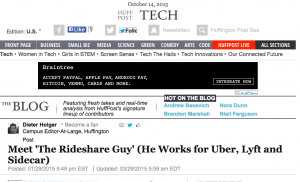 Meet ‘The Rideshare Guy’ – He Works For Uber, Lyft and Sidecar (Huffington Post)

Harry Campbell has already been featured in The New York Times for his expertise (he runs the blog and podcast The Rideshare Guy). You may have even heard him recently on NPR’s Marketplace Tech.

It’s not uncommon for rideshare drivers to drive for multiple services, and Campbell drives for three. With ridesharing gaining so much attention lately, I decided to reach out to Campbell for an email Q&A. 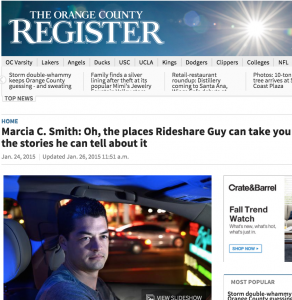 His experiences have given Campbell an avenue to become a celebrity of sorts. In addition to his day job, and his night job, Campbell is widely known online as The Rideshare Guy, or “RSG.”

Campbell, as Rideshare Guy, is part comic, part consultant, part industry savant for thousands of people who have turned their cars into part-time money machines.

Here’s a full list of all the places I’ve been featured.

Huffington Post Live (Video): What Lawsuit Means For Uber and The Sharing Economy

NPR (Radio): California Rules An Uber Driver Is An Employee, Not A Contractor